Developed by hardy pioneers, Swalley was originally organized as the Deschutes Reclamation and Irrigation Company (DRIC) in 1899. Much of the city of Bend (before it was a city) was originally a part of the boundaries of the DRIC, settled under the federal "Carey Act" and the Right-of-Way Act of 1891. DRIC obtained its water rights for natural flow diversion from the Deschutes River with a priority date of September 1, 1899.  From 1891 to 1923, the original irrigation delivery system was constructed. DRIC was privately held for ~95 years, and in 1994 incorporated as a public, municipal corporation -- an ORS 545 irrigation district, and took the name of Swalley Irrigation District.

The Swalley family originated in Switzerland as descendants of the Celts. Johannes Zwalle came to America in 1749, settling in Pennsylvania.  The next 3 generations were also in Pennsylvania, and then John Swalley moved to Ohio where his 1st son, Benjamin Franklin Swalley was born.  Benjamin then moved on to Iowa where Albert, George W. and Charles B. Swalley were born. Benjamin moved the family to Star, Idaho in 1863 and started an irrigation canal that became the Pioneer Ditch. Benjamin Swalley and his wife Emma are buried in Star, Idaho. George W. and Charles B. Swalley arrived in Oregon by at least 1880 and are listed as living in the Linkville Census. Charles and George Swalley were part of the eight families that pioneered the first irrigation ditches in Central Oregon. Of the eight families involved, the Swalleys were the most active in building what came to be known as "The Swalley" (or Swalley Main Canal/Ditch). Charles was known as the "boss" of DRIC, and the force in completing the building of the flumes, ditches, and getting the easements for the main canal. Because of this, most folks of the time period referred to DRIC simply as Swalley Water, or Swalley. The name stuck. Several of the children of both Charles and George became involved for a time in the operations of the DRIC.  What became of Charles B. Swalley and his family is unknown. George W. Swalley and his wife Almira are buried in Bend, Oregon.

The original headworks and wooden flume for "The Swalley" main canal were constructed in 1900 and located approximately ½ mile upstream from the Steidl/Tweet Dam, one mile north of downtown Bend. This dam was built in the current location of the North Canal Diversion Dam. From 1900 to 1909 ditches, flumes, and roads were built. The wooden flumes were necessary to transport water over sections of challenging volcanic topography. The Swalley is considered one of the earliest completed U.S. Carey Act projects in Central Oregon and has historical significance in Bend because of its importance in early irrigation development and association with prominent pioneers in Central Oregon.

The District operates and maintains over 28-miles of main canal and laterals, including several existing piped segments and a state-of-the-art hydroelectric facility. With a nod to the pioneer spirit of our forefathers, in 2016, the District embarked upon a cutting-edge System Improvement Planning (SIP) effort to create a blueprint for mapping out a path to modernizing the entire conveyance system.

Consistent with its ongoing modernization program, building out a system-wide piped conveyance to deliver pressurized water (and conserve water for the environment) is the way of the future. Piping canals is the contemporary method proposed for maximum water conservation, delivery efficiencies, energy efficiencies, carbon reductions, public safety, and environmental protection. The SIP will become a key element of the District’s planning documents and is expected to become the basis for future phased construction. We suspect that the original Swalley pioneers would be proud that the pioneer spirit is alive and well.

The district is in the process of documenting its history back to 1899, obtaining cultural and historic documentation and surveys, and will post additional items as the work progresses.

Eight pioneer families formed the Deschutes Reclamation and Irrigation Company in 1899. They came to Central Oregon to homestead, and ended up forming the first irrigation project on the Deschutes River. Two of the families were headed by George W. and Charles  B. Swalley. Charles ended up being the "boss" in organizing the administration of DRIC (as well as leading the field crews in building the first flumes that carried water to the main ditch). Later, a county road was named Swalley Road, this was near his homestead. As the years went on, DRIC was generally known as Swalley Water. We don't have much history on the other original pioneer families, except for their names, which many of today's roads in Bend, Tumalo, and Redmond are christened with. The original Swalley homestead developed by Ed Monroe in 1904, is located at 20510 Swalley Road. 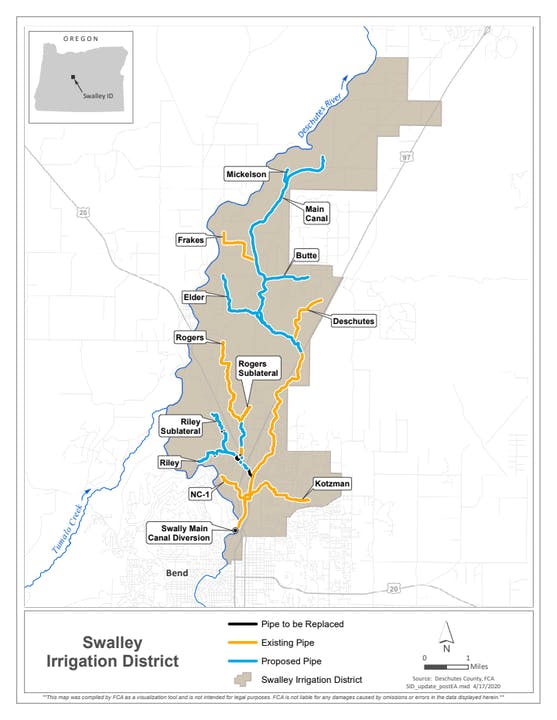 Swalley Irrigation District is fully committed to providing accessible facilities, elements and channels of communication to all members of the public. As part of this commitment, Swalley Irrigation District has a policy of providing an accessible website compatible with the Web Content Accessibility Guidelines (WCAG 2.1) and commercial screen reading software. All features of the website are coded to allow individuals with vision and other impairments to understand and use the website to the same degree as someone without disabilities. We welcome feedback and can often resolve issues in a timely manner if they arise.

If you need any special assistance or accommodations

In addition to testing with users with a wide range of disabilities and coding our website to WCAG standards, Swalley Irrigation District regularly scans its website to ensure ongoing compliance, and makes timely changes to any inaccessible changes, if any are found. In our ongoing commitment to transparency, we make the last three months' reports available to the public.

Please note that this site may link out to third-party websites, such as state or federal agencies, that do not have accessible content. This site may also include documents provided by third parties included in our agenda packets, for example. While we cannot control the accessibility of content provided by third parties, we are happy to assist any member of the public with reading and accessing content on our site.

See an opportunity for us to improve? Please contact our accessibility officer or call us at (541) 388-0658.

We are committed to your ability to access all content, and we will respond to all requests as soon as possible.

Thank you for reporting this accessibility issue. We'll be in touch soon.
There was an error saving your report. Please make sure you have entered all required fields and try again.
This site is protected by hCaptcha and its Privacy Policy and Terms of Service apply.